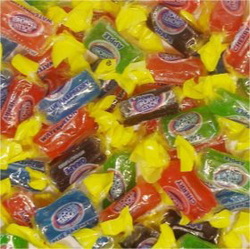 Jolly Ranchers were found in 1949 in Golden, Colorado. The
founders were Bill and Dorothy Harmsen who started the company in 1897. During that time period, hard candy sales were growing larger and larger. The company was named “Jolly Rancher” to suggest a hospitable, western company. The company
originally made chocolate, ice cream, and hard candy.  These
items were sold at “Ranch Made Ice Cream” stores around the Denver area. Jolly Rancher is also known for its candy, “Fire Stix”. During winter months, the ice cream didn’t make a great sale. The Harmsen's then decided to focus on hard candies.


In 1951, production moved from Golden to Wheat Ridge, Colorado. Jolly Rancher made the “Famous for Flavor” line for the hard candies. In 1966, the owners of Jolly Rancher decided to branch out to reach more customers and started to sell their Jolly Rancher candy to Beatrice Foods. Jolly Rancher Company was sold to Beatrice Food and the production of the candy remained in Colorado. In 1983, Leaf Candy Company purchased Beatrice Foods.  In 1996, the Jolly Rancher candy production was moved out of Colorado altogether when the Hershey Company purchased Jolly Rancher and moved production to Mexico and Canada. The buyer was
Huhtamaki Oy who lived in Helsinki, Florida. The Hershey Company started to make a longer list of jolly rancher candies. Using the same great flavors in lollipops, drinks, chewy candy, sour candy, jelly beans, candy canes, and gummy candies. The Hershey’s Company continues to sell jolly ranchers at super markets and convenience stores. The newest jolly rancher was the Crunch n’ Chew. The Crunch n’ Chew is “chewy in the inside, crunchy on the outside.”